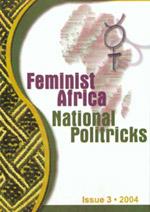 Feminist Africa 3 critically explores a continental landscape largely driven by the still heavily masculine imperatives of nation-statehood. Within this paradigm, Africa has accumulated four decades of post-colonial political experience, and three decades of gender equality activism. Contemporary feminist scholarship on African politics faces the task of interrogating an increasingly tricky landscape. On the one hand, this displays some of the world's most elaborate national machineries, and makes some of the grandest policy declarations, while on the other hand, it also includes many nations that have still not embarked on even the most rudimentary steps towards the political equality of women and men. As such, they cannot legitimately claim any level of democracy, even at the minimal level of political representation.