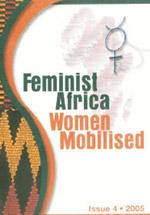 This issue of Feminist Africa 4: Women Mobilised presents new theorisations of postcolonial gender politics. The contributors document and critically reflect on contemporary gender struggles in a number of key arenas. Needless to say, for every example that is discussed in the following pages, many more have been omitted, about which a few points are worth noting.
The first is that the diverse mobilisations occurring around sexuality are not directly addressed in this issue. This is not because we concur with the reluctance that many African women's movements display towards matters of sexuality. On the contrary, we hold the view that struggles over gender-based violence, trafficking in women, sex work, sexual orientation and sexual pleasure lie at the centre of feminism. It is our view, however, that the deeply heteronormative character of most women's movements in Africa has effectively constrained our engagement with sexuality and sexual politics, and that this has prevented the emergence of more radically transformative politics.